The Oyin Burn & Revive your skin with this Device

HI Everyone
This video features an Oyin shampoo update and my experience with the Neutrogena wave.

Hello
This is my review of my Afroveda conditioner and my Kinky Curly question.

Hello
Here is a video that features swatches of my MAC lip products. I also swatched two covergirl lipstains and a Maybelline lipstick in the color Are you Red-Dy. 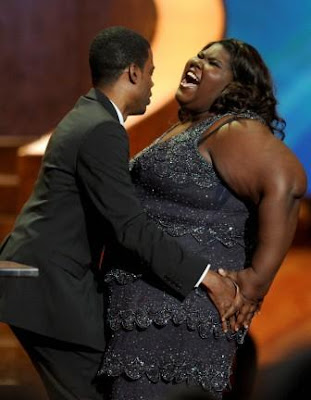 When I first heard NYC radio host, Ed Lover, suggested that Gabby Sidibe would wear sweet potato pants, the imagery that him comment evoked for me made me chuckle. Now I'm almost embarrassed that I ever fed into the jokes made about this young actress. Howard Stern, Jamie Fox and others have make jokes about Gabby's weight and appearance. Like Gabby's mom said, we all have eyes, so obviously she knows, like we all do, that she is overweight. So why the barrage of mean spirited jokes?
What upset me most was when I first the above picture of Gabby Sidibe being disrespectfully groped by Chris Rock as she walked on stage to accept her NAACP award. When asked to comment on the situation she said it was her fault because she is so hot Chris couldn't resist. However, she did mention that her father was less than pleased with the antics of ol Rock. Perhaps Rock though this inappropriate action was his declaration to the world that he thought she was attractive even if everyone else thought otherwise. Regardless of his intentions, no one asked his crippled fingers to caress any part of Gabby's body so why did he feel it was ok to do that? I couldn't imagine him doing that to any other actress who would have walked on stage to accept an award. So what may Chris think he could get away with this behavior? In years to come if someone where to do that to his daughters, would be he so quick to laugh it off? I was thoroughly disgusted with him. And to think people were going crazy over Kanye's award show behavior but this seemed to have been swept under the rug. Yeah yeah I mentioned the Kanye thing again lol but is this not a more serious offense?
Overall I'm just sick of all teh Gabby jokes, let the lady enjoy her time in the light and move on to other movies or whatever is in store for her.
Please weigh in.....(no pun intended)
Movies
I just wanted to quickly share my must see movie list:
1)The Karate Kid featuring Will & Jada Smith's little boy Jaden, Taraji P. Henson, and Jackie Chan. If anyone has ever seen the old Karate Kid movies you may be interested in the remake of this classic! Little Jaden looks like he worked so hard to get his moves down and he is quite the little actor. Jackie Chan is simply amazing when it comes to his coordination and special move so I can't wait to see him too. I love the range of characters played by Taraji, so count me in when this movie hits the theaters.


2) Why did I get married too?
With an island setting and all of the original characters, I am ready to watch the followup to one of Tyler Perry's best flicks.


3) Just last week Friday I saw the trailer for Just Wright. I enjoy the work of director Sannai Hamri and I have come to expect good work from her. I have to tell you that as soon as I saw the movie poster with Queen Latifah playfully nestled up with spoken word artist/ rapper Common I was thinking- HUH? I've seen Latifah play the best friend or sidekick to the woman who falls in love but she is never really the main event. In Brown Sugar mos Def couldn't get enough of Latifah's character but the main story featured Sanna Lathan. Ok Ok on Living single Latifah did have her own love story line but never in the movies. I'm happy that Sanna hamri had the good sense and foresight to envision Latifah in such a role. This has nothing to do with her rumored personal life but Latifah looks like she could take Common in a fist fight so i was concerned with the pairing of these two in the movie. Nevertheless, I think sanna pulled it off brilliantly because it works! She isn't forcing Latifah to play some girly girl (not that she couldn't do it if she wanted to) but instead Latifah plays a down home, almost tomboy who can also wear a little black dress and look great. LOVE IT and I can't wait to see this film.
Which films will you be watching this season?

Nail polish and my weekend haul

weekend post-Rhassoul clay for my hair

Hello Everyone
This is another post for the weekend. If I don't get these videos off my camera I will never post them so I guess this was the weekend to get busy. For those of you who missed it, there are some more videos in the post below.
Have a great weekend. 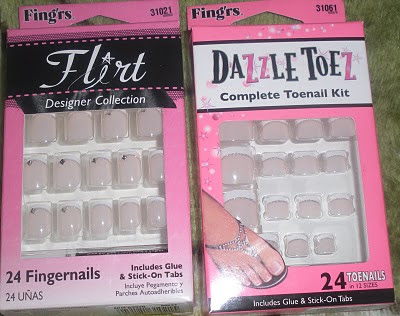 I am at times, that gal who seems to realize at the last minute as she's rushing out of the house that her toe nail polish is chipped. So I grab a bottle of polish and try to cover any imperfections that would be visible while wearing my peep toe pumps. Inevitably, my toe nails always seem to touch something that smudges my nails. I know I am not the only person this has happened to. Let's face it we are all busy beavers and many of us don't have the time required to manage our nails each week, so what's a gal to do? Fing'rs has got you covered with their easy to use fake nails. I have never been a fan of using glue to apply nails, but it's a part of the process if you indeed wear fake nails, right? WRONG. For all of you glue lovers out there the Fing'rs company has not left you out in the cold, because they provide you with 24 designer nails, glue, a nail file AND stick on tabs. 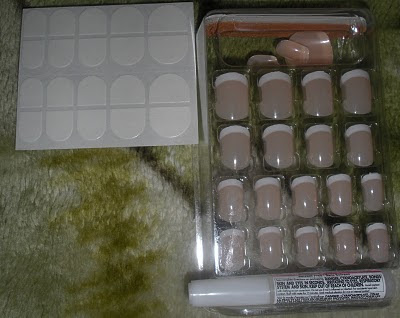 If you are opposed to using glue because of wear and tear on your real nails then you need to try the stick on tabs. One reader once commented about fake toe nails, and I had never seen them or heard of them so I was at least interested in the concept. When I received and email from Fing'rs asking me if I wanted to try out their product which includes fake toe nails, I jumped at the opportunity. I have to tell you that it took me a minute or two to get used to the thought of wearing fake toe nails. The idea seemed so weird but then I remembered the reader who said in her comment that she would just throw on her fake toe nails when she had events during the summer and it looked great in her peep toe shoes. Well I decided to put on my big girl pants on and try those toe nails. Can you say sold? I used the sticky tabs which I didn't think would do much of anything, but it was great! You take the sticky portion of the tab and press down on your natural nail. After carefully lifting up the sticker, the sticky part remains on your nails and you simply apply the fake nail. If you apply the fake nails with the sticky tabs the nails will not last as long as they would if you were to use glue. However, I can tell you at least two reasons why the sticky tabs are so much better in my humble opinion:
1) When the nails are finally off, they looked so good that I could have reused them if I wanted to do so I just needed more sticky tabs.
2) My natural nails were in perfect condition!
My fake toe nails lasted for about 3 days but I eventually pulled them off myself, you know I'm a nail polish junkie, but who knows how long they could have lasted.
I know you've been waiting for the entire post for this so here is my toe..lol. Now how sweet does that nail look? I love the short length of the nails for your toes and your hands. 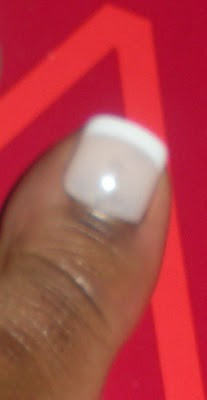 I also asked fellow blogger Meandering Memorandum to wear a pair of the nails for me so she again waited for a special occasion to throw them on her fingers. She was too scared to use the sticky tabs so she opted for the glue which held up nicely as she danced the night away. 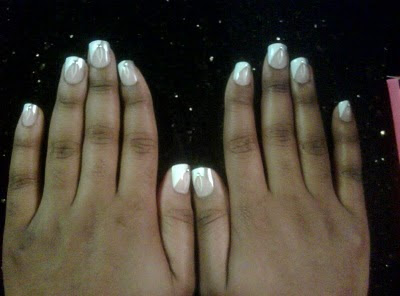 The nails looked so nice on her and she also appreciated the short length of the nails. The diamond accent is really cute too, but Fing'rs also offers plain short nails if you are interested in a more tame look.
If my nails even try to look like a disaster at any point this summer, I will be sure to press on the Fing'rs toe nails and go!
You can purchase your Fing'rs products in your local drugstore.
Posted by Product Junkie Diva at 9:56 AM 4 comments: