If you want baby soft feet, I recommend that you try the product Baby Foot. You can buy this $25.00 product from Beauty Sage.com

Check out my review below!

Posted by Product Junkie Diva at 11:14 PM No comments:


Here is my latest video-
Posted by Product Junkie Diva at 9:54 AM No comments:

When I saw Pixi Dust, the new textured polish by  Zoya I decided it probably wouldn't be worth the $9 price tag. I have used textured polishes from other brands and they have left much to be desired. I was also thinking that the beautiful appearance of the glittery polish featured on the Zoya site was due to good lighting and a great photographer. However, after seeing the polish on a fellow blogger, Styled via Tia, it looked just as beautiful as it did on the site, so I had to purchase it. Although it is one dollar more than the typical Zoya polish, I say go for it!
In one coat you get a light gray color but once you layer this polish you get more of a sliver color with blue tones mixed in. This polish is sparkly and matte at the same time, I can't stop looking at my nails.  Unlike other textured polishes after washing my hands the quality of the polish remains high.
The color featured below is NYX, but I also purchased the red color Chyna. Now that I love this polish so much, I will likely pick up a few more from the Pixi Dust collection. 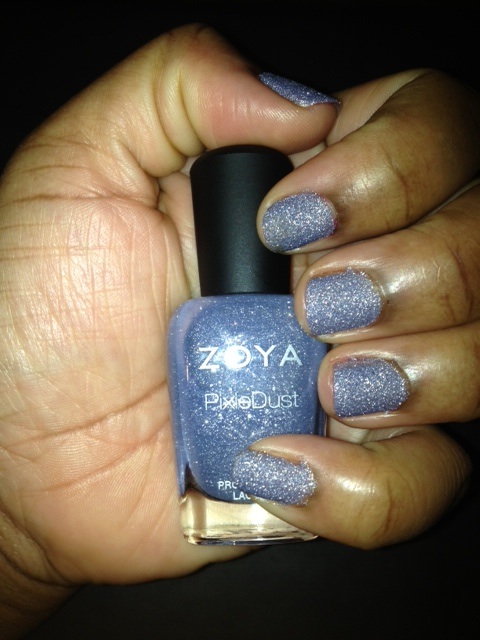 The verdict is still out on whether or not I will buy polishes from the OPI liquid sand collection, because I have seen some unflattering pics of that polish on other blogs.
What are your thoughts on these textured polishes hitting the market?
Thanks for reading.
Pjd
Posted by Product Junkie Diva at 10:09 AM 3 comments:

Take a journey with Tarte Cosmetics. Take a look at my video below before you have your opportunity to purchase it tonight on QVC!
Thanks for watching.
Pjd

WNTW 2013 Beast of the Southern Wild and Milly Focus

Hello Everyone
I hope you're having a great Monday.
Here is my latest WNTW video- enjoy.

On another note I wanted to get your thoughts on a movie that has received a great deal of praise- Beast of the Southern Wild. I rented this movie through iTunes for $3.99 and you can too if you were not able to catch this film at any of the independent film festivals. I think the little actress Miss Quvenzhane Wallis did an outstanding job in her role as Hush Puppy along with Mr. Dwight Henry, who played her father. I could not envision two other actors playing those roles. It really looked like Dwight had been grooming himself for that type of role all of his life.
I will not spoil this film for those of you who plan on seeing  but I will give my general feelings about the film. In my opinion this movie was about the the love between a parent and child, pride, hope, dreams, and the circle of life. All the makings of a great film right? Well not so fast......
I loved the end, not only because it was over, but because that was the only part of the movie that moved me to some degree. I felt that there were too many unanswered questions rolling through my head as the credits scrolled down my screen. I wanted to love this film but I didn't even though both Quvenzhane and Dwight acted their hearts out, so it is through no fault of their own.
If you saw this flick, please share your thoughts.

We often have many aspirations but only a few if any of them come to fruition. Maybe, just maybe we could achieve more of our goals if we have Milly-like focus. Yes, I just made a Scandal reference because it is so fitting. We have known from the start that Milly likes power and she has political aspirations. Every obstacle that has come her way she has thwarted by any means necessary. As her husband lay bed ridden and in a coma, she forges documents to secure his and inevitably her position. However, she topped all the charts when she had her labor induced to protect her life in the White House. Now I'm not suggesting that we cast our moral radar in the wind to achieve whatever we hold dear, but I am suggesting that we keep our eyes focused on the goal and crush any obstacles that come our way.
Anyone who knows Milly, knows what she is about and what she wants, can the same be said of us? Do we verbalize what we really want and follow through with our actions? Or are we just daydreaming without ever making firm and decisive steps toward our goals?
So what say you?