Just Wright- Not a spoiler 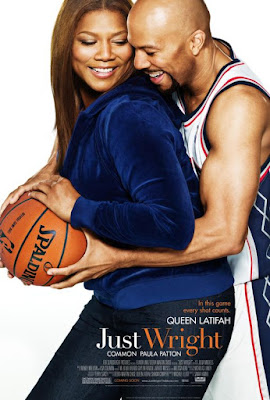 If you didn't already see the film Just Wright, I encourage you to check it out as soon as possible. I am so disappointed that it came in fourth in the box office last weekend. The movie made me think of Love and Basketball so if you enjoyed that movie you will likely enjoy Just Wright too.
I don't want to spoil this for those of you who did not see the film so you can read this review if you would like but don't read the comment section. I imagine some people will be more specific in the comment area- you have been warned :-).
I thought there were a few parts that could have been expanded just a tad like Latifah's relationship with her mother. At some point in the movie, I was waiting for a big Love and Basketball,"I'll play you for your HEART" type of moment and I didn't quite get it, but overall it was a nice film and I will definitely DVD it.
The Commercial
1)On the commercial for the movie, there is a scene where Latifah throws ice on Common and he jumps up and says "Ok, Ok". Even from the commercial it didn't seem real, I felt like someone should have yelled cut until Common did that line properly.
2)Latifah in the commercial attempts to do the flirty cute girl thing as Common reaches around her to get a cookie.-NOT BELIEVABLE. She just always looked like she could put Common in a choke hold at any moment. Whenever I felt that Common had been matched up with an actress that could kick his butt, I had to remember art was just imitating life..lol Ok Ok I'm done, i just needed to get that out of my system. 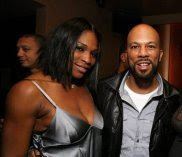 Side note-Perhaps I was the only person who didn't know this but Common and Serena have a 10 year age difference. He is 38 while Serena is 28....ok that's all I wanted to say back to the movie review.
I think Latifah looked natural and lovely throughout the movie. Paula Patton also looked lovely along with Phylicia Rashad. The verdict is still out on Pam Grier. Common is not my version of handsome but there were a few brief moments where I kinda somewhat thought he was ok.
For those who saw the movie feel free to get more specific in the comment section. What did you think of the movie, any highlights? Any low points?
Posted by Product Junkie Diva at 7:23 AM 6 comments:

I hate being away from all of you for so long :-). I will get to all of the comments that I have not responded to yet, I am very sorry for the delay!!!!
Let's jump right into things-first up is a video where I talk about hair products, nail polish and a mini haul. Next up I talk about electronics, and facial products.

In The Theater
As I'm sure you know, Queen Latifah's latest flick, "Just Wright" opens in theaters today. Will you be checking it out? I know for a certainty that I am heading to the theater tonight to support this film.

I know I've never spoken of this show on my blog before but LOST is coming to an end. Lost is the most riveting series I think I've ever watched on tv. It has held my interest from season 1 and the episodes just get better as more information is revealed. Oh and when they killed off my Sayid......WHHHHHHYYYYYYYYYYYYYYYYYYYYYYYYY
Where has Ben been? I've lost track of him and I can't remember the last time I saw him on the island.
Any of you watching lost? How do you think it will all end?
A Family Business
Brandy and Ray J are siblings and the love is apparent but the divisive behavior of Momma Norwood is also clearly seen. She favors Ray J and she may not recognize how obvious her favoritism is....sigh. Ok going back one episode -when the stripper arrived at Ray's office the mother was so mad that Bandy and her dad however she wasn't upset with Ray J for allowing his friends to engage in such shenanigans at his place of business.


Even though Brandy at times has a strained relationship with her mother I didn't appreciate the mom not showing up to Brandy's performance because she was still upset over strippergate 2010. As I see it, if you are going to be both mom (can't change that) and manager, then when it comes to business you need to be there for your client even if you are upset with your daughter. The father loves to say he won't get between the two of them but he will listen to both sides. To that I say MAN UP, this is YOUR family too, you are not just an innocent unrelated bystander so speak up and do what needs to be done!
I also think that Brandy's friend Shay, needs to stay out of family affairs. She was asking Brandy if she thought it was time to separate the mom/manager role by finding another manager. In the end they are still a family and Shay you are NOT my dear. I can see that Brandy will always side with family and I totally understand that, so Shay needs to stay in her lane and just hear Brandy out when she vents. Did you notice how quickly Ray checked Shay when she tried to tell him about his inappropriate behavior...LOL.
What do you think of Bran Nu? Brandy as a rapper isn't something that I necessarily saw coming but I think she did a good job and her makeup was great when she performed at the House of Blues.


On a completely different note what is going on with Timberland's figure? He wears these t- shirts with his arms exposed and it looks like he lifts weights. Does he think the public believes those lumpy curves are muscles? I think NO Timbo. Any while we're on the subject Dark Child had on some ill fitting hip huggers when he attended the office party. When he walked away from the camera you saw his fluffy sections oozing out of his pants.....LOL. 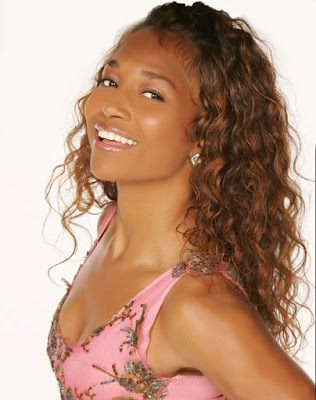 A little baby hair to the side never killed anyone but Chilli enough is enough. Moving on-

Chilli's quest to find a man stopped briefly last week as she went to see a therapist. She revealed a portion of her private life when she confessed that she had an abortion which she seems to regret. She then spoke about Usher and the fact that there were certain things she couldn't live with so the relationship had to end.
She takes her son out on dates so that she can groom him to be a great date when he enters that stage of his life. She told him not to "smack" while he was eating- did you catch that she too had some mouth wide open scenes while eating? Well I guess you want your kids to learn and do better so whatever.....

Nothing too exciting happened this episode.

Basketball Chicks on the side Wives
In the last episode the women revealed to Royce all that Gloria had said about her in an attempt to make Royce realize that Gloria is not a friend. Can we have the lady Suzie, (I think her names is) write down whatever she wants to say and then someone else can read it because her speech impediment is giving me a headache.
Are you watching this show?

I hear that Tiny and Toya will not return for another season because TI doesn't want Tiny to move forward with the show? Did you hear this too? Perhaps it's just a rumor.
The Joneses

The kids went to LA with their mom to pursue their separate dreams- the son wants to be a singer while the daughter wants to be an actress. I will not talk about the children on this blog, so I will just move on in silence, but you all can read my thoughts right??? Ok good. lol
Posted by Product Junkie Diva at 9:31 AM 7 comments:

For those of you who watch youtube, do you like the new changes? Is it the new rule that your video must end at 10 minutes on the dot? I know they have always had the 10 minute rule but technically you could go a little beyond the 10 minute mark, just as long as you didn't touch that 11th minute.
Anyway here are some videos which youtube finally allowed me to upload-ughhhhh.

The first videos- part1 and 2 focus on foundation. I don't wear foundation as I will explain in the video but I need it for some upcoming events. I think I've found the best foundation everrrrrrr.
I also compare the foundation that I like to a Revlon foundation that people seem to like, or at least that's what the commercials suggests....
Part 1

Unrelated video- I am discussing the changes at Target and some of my DSW finds.


Godiva and a Pooka Review

Once again I ran out of time...that hair video is coming later today without question :-)
thanks for watching!!!!!
Posted by Product Junkie Diva at 2:09 AM 3 comments: