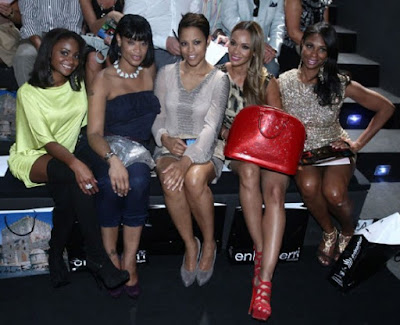 ** picture courtesy of theybf.com
Hey Everyone
I watched some prime time classic tv over the weekend and I hope you did too. Am I talking about some digitally remastered classic film that can only be found on the Turner Movie Classics channel? Nope, I'm talking about BASKETBALL WIVES. Yup you read correctly, I was glued to my seat as I watched every second of that drama filled episode.
Shaunie- I am so disappointed with her this season because she has a totally different vibe. During the introductory season Shaunie seemed like the listening ear who never really picked sides but liked to give everyone their fair shake. She was more like the Queen Bee who never really got her hands dirty but this season she seems a bit more catty. During the last episode she sat down at Gloria and Suzie's table grilling Gloria about her never going to happen wedding date. Even though I am by NOOO stretch of the imagination a fan of Gloria, Shaunie's badgering did make her look a little bitter, and miserable. Have you nothing better to do than to run around town with your three sidekicks looking to start some mess? When Gloria said - "well you did put on that wedding dress and now you're divorced and miserable"- I said ok one check for Gloria and an "excuse me but you have egg on your face" for Shaunie.
The lesson of the week for Jen is think before you speak.
Jen sat at the able with all of the ladies and asked Gloria- why would I be jealous of you, because you had some babies out of wedlock?" I'm at home thinking hummmm that snarky remark may have had an impact on Gloria if A) your main Ace Evelyn and Royce were not in the same situation..whomp. And B) - if your marriage were not crumbling more each minute that remain married. double whomp.
Her second foot in the mouth conversation came when she spoke with her husband. Don't open up the divorce conversation if you're not really ready for what your man has to say. She casually sat back and thought she would have some soul searching moment with her husband when she said- well we can talk about it (referencing divorce) and Eric replied- "there ain't nothing to talk about -if you don't like your situation LEAVE the situation". WHOMP WHOMP WHOMP- but so true. Maybe she is waiting by Eric's side thinking that some tearful remorse filled dialogue will one day happen, but it won't - at least not on tv. Eric made a few valid points, he referenced last seasons episode when never going to get married Evenly was encouraging Jen to cheat on her husband- he clearly wasn't a fan..lol. Also he said she stays out every night, well if that's the case then can you really be upset when he stays out? Let's face it neither of them are handling the situation like adults but Eric made no bone about it this past Sunday- Jen can feel free to BOUNCE at any point. He even started to divide up the assets before Jen even realized how far the conversation had gone..LOL. Now I'm not one to laugh at another person's misery but that was funny. I give it to Eric for being honest at least in that moment.
Suzie I don't see a big tv career in your life unless you will make reality tv your bread and butter.
Royce- dear little Royce it annoys me when people try to force others who are having an argument to just get along. So I'm annoyed by her constant " are you coming to the event" knowing that Evenly just wants to chop Suzie's head off.
Evenly takes things too far and just likes to pick on the people who she considers to be weaker. After exclaiming "I'm from the Bronx don't play with me" those LA girls seem to run scared. However, the preview of upcoming episodes have helped me to appreciate that her "I'm from the Bronx" line doesn't make a "Real World" Veteran like Tami run for the hills. *fists will fly.
Tami- your wig which you clearly cut yourself offends me..- the end.
Gloria- Please don't think we are all idiots...lol your wedding date was not called off because your guest list went to 280 people nor is it because you are moving. Knock it off.
side note- Is the therapist that Tami went to see on the VH1 payroll , because that is the same therapist that Jen will visit next episode..... #justwondering.
Have you been watching this season? What are your thoughts?
UPDATE- on a popular website, theybf.com, Shaunie speaks out to explain the bad on air behavior of the basketball wives.
Posted by Product Junkie Diva at 3:36 PM

OUCH...but good words chica...I am half and half it was a good hot mess. I cant wait for Sunday! Tami just dont give a damn.

Hey Tamstyle
Ok , I'll be nice..lol. That show is a hot mess.
Tami is a good addition to the cast.
pjd

LOL you really summed it up. I don't have much to add to all this. They clearly need to stop playing with Tami because she clearly doesn't play. Done changed since her real world days, LOL.

suzie is annoying. i didnt know that royce is with child... evelyn is funny. i like her only because she is able to manipulate the girls (jen mainly) to do what she wants

shaunie always seemed fake innocent on the first season and i am glad that she let her guard down a little bit. it was like she was promoting drama like her life was sweet. she seems more open this season.

that convo with eric and jen, i totally agree. aint no man gonna give you the lifetime movie drama conversation. especially on tv where everyone can see. he clearly has to do extra to perserve his ego because his money and his ego is probably all he has going for him. he is so unfortunate looking. she shoulda did that in private.

Just me- thanks! Tami is no joke but she just has to calm down..yikes, that's too much "loudness" in public lol. LOL @ you calling Eric's looks unfortante..hahahhah
thanks for reading.
pjd