On Monday I tried to make another concoction, this time with mango butter and it was a disaster so more testing in needed. I received my fragrances so I was eager to use them to create a well scented body product but it was a HOT MESS. It was literally like mixing water and oil so I obviously need to go back to the drawing board and make something happen.
I also purchased 2 oz of pure blueberry seed oil, it is packed with antioxidants which should help in the anti aging process. This oil will eventually be used in a skin moisturizer or some facial product once I come up with a great combination of ingredients.
This 2oz oil cost $11.25.
My Hair 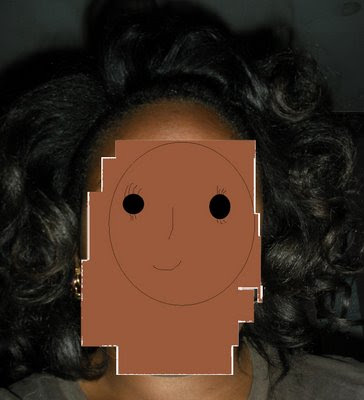 Someone asked to see my hair so here is a pic that I took last night. I washed my hair on Monday and I do have shrinkage but this is my hair and how I usually wear it especially during stretching periods. I have not worn the traditional straight wrap in years but I think I may get that style in December. I will probably post another pic soon stretching the curls so you can see length for those of you concerned with that.

HOA
Did you take the housewives test? If so which housewife are you most like? (I want to know..please share) I am DeShawn. YAY I actually like her (minus her business sense).
I do like Sheree's color palette, in terms of some of the colors she has worn on the show, but she still annoys me.
Let me preface my next comment by saying I have never organized a fashion show and I am sure there are many pieces to the puzzle but who allows the final sample outfits to arrive the day BEFORE the big event....huh? I was confused. And did Sheree take a stab at Deshawn when she said even though her event didn't go as she had envisioned, it “she won’t cry in a corner” (think of Deshawn crying in the corner at her charity event).
And I was LOL when I saw those dresses which the seamstress apparently left at the front door.lol
Lisa her husband is 30 and I am guessing she is at least 40 since she said she is older than Deshawn (who I pegged at 36 based on a previous episode where she revealed how long she had been with her hubby) but either way there is a sizable age difference between Lisa and her husband. As a woman what is the biggest age difference that you would deal with in a relationship?
Kim said “I don’t want to sit around with Nene and eat chicken”....ummm ok
Poor Nene who learned that Curtis is not her dad.
Oh and please tell me that I misunderstood the preview for next week I know Sheree is not trying to align herself with the all too talented Michael Knight (Loved him from Project Runway).
Posted by Product Junkie Diva at 6:50 AM

You know I really commend you for making your own formulas now LOL I am so lazy!!!!! But you have to tell me who it all turns out!

Girl your hair is thick and long now! I'm so like DANG I wish my hair could be that thick!

HOA...I did NOT like Kim's comment about NeNe eating chicken. I think the divide on the show is marrieds vs. singles. I did the Housewives test, too. I came up NeNe!

I am DeShawn. It took a while for her to grow on me but I like her now. I hope Michael tells Sheree about herself and her wannabe designs. And if Kim says HEY SISTAAAA one more time when she’s on the phone with Sheree I’m going to scream. Nene was the only one who had an event that was successful so Sheree and DeShawn need to take notes. Why did it seem like the seamstress threw the clothes on the front step?

omg ur hair is so gorgeous! u go girl! i am so happy when Michael Knight tells sheree the truth...she needs to quit playing with fashion...that is so true, how do you get ur samples the day before? all these girls are trying to do big things when they really just hire amateurs to make themselves feel big and bad but it always comes out a disaster

first, your hair looks beautiful!
second, i came out as sheree. i feel some type of way about that...

now on to the show:

yes she took a jab at Deshawn! let's talk about that pedi on old dude! also, if he is 50, kim HAS to be 60! kim's comment was kinda racist but she is also an idiot...

Your hair is gorgeous! I'm Deshawn too. I didn't see the episode but just from reading, I agree with "the frugalista files." Maybe I'm being sensitive, but I automatically became on the defense about the "eating chicken" comment from Kim. I will have to watch the whole episode and see what that was all about.

Since your a beauty gal, like myself, Did you notice the full face of makeup(including mascara) that Lisa was wearing when she was swimming? I did and it was hilarious to me!

Nice head of hair! I took the quiz. I'm Nene-although I'm going to catch the show on Demand because I haven't been watching.

I agree your hair is Gorgeous!
Kim, Kim-- that remark was not funny! Did U notice the little smirk she gave after she said it? OMG I noticed the full makeup during Lisa's swim- WOW....
Ok, why would you have the samples delivered the day before the event??? What's up w/ the seamstress leaving them on the front door???
I am Nene~ btw- her gay boyfriend is just SO Fabulous I almost can't stand it!

Loving ur hair, is that a roller set or flexi rods? Anywhoo, off to take the quiz! Let us know about the blueberry oil!

Thanks everyone for your nice comments.
Frugalists I didn't like the comment either. Good catch on the divide.
Suziec LOL @ hey sistaaaaaa.. so true that is very annoying. The clothes the seamstress made were not elegant at all.
B thanks
dysfunctionalchick....lol ok I will keep that in mind..lol
Ren MKnight's clothes are HOT. I would think she would have to do a fitting with the models, make alterations etc. but no she waits until the day before, how sad.
Antithesis Ok we have our first Sheree in the house..Yes when he said he was 50 I thought wow ok he looks good for his age.
B Fly after you watch it I don't think your opinion will change, Kim is annoying.
Anonymous YES YES YES i noticed..lol like she was ready for a video shoot and she had on false lashes...lol
TravelDiva I hope you like the show.
Shonda yes i certainly noticed her smirk..and nene's guy pal has the funniest lines.
Yes Jmilz I use roller, the magnetic rollers with the metal clips. I will post a pic even though you probably know what I mean.
Thanks for reading everyone.
PJD

Oh ok...the infamous roller sets! It looks great...i am so used to people who do rollerets combing them out to wrap it right away!

I did the HOA test and I am Lisa.

I don't think I'd date anyone more than 10 years older or 5 years younger than me.

I agree with you assessment on Sheree and the fashion show. I was surprised that she allowed the samples to be delivered that close to the actual show date. But she did recover nicely with having the sketches blown up and on display.

Jmilz I haven't wrapped my hair in years but I think I will do it in december. I like the magnetic rollers most of all because they don't rip my hair out and they don't leave any imprints of the rollers, just a nice smooth result.
@laughing aka Lisa I can't wait until the final episode which airs tonight. It seems like the end came so quickly.
@Yummy..lol thanks
thanks for reading everyone
PJD

When are we going to see that beautiful face!

Hey DE you are too much...lol We shall see.
PJD

There's something wrong with this test. I came up as Deshawn twice and I varied my answers. I was hoping for Lisa and I would have been ok with Sheree (even though she's catty), but I'll take Deshawn. As long as I'm not Kim, I'm cool.

T...lol as long as you are not Kim. I don't think anyone wants kim. Can't wait for the new season
PJD